We parked our cars at the Three Legged Cross – which technically means we missed a little bit.  I confess we didn’t worry about going back to do it!

The path starts off down a lane to the curious little mini-castle called Grotto Lodge.  This is part of the Highclere estate… and if you are rich enough you can pay to stay the night there.

Highclere Castle is a country house built in the Italianate style by the architect Charles Barry in the 19th century.  It is set in grounds designed by Capability Brown in the 18th century.  Highclere Castle has been used as a filming location for several films and television series, including 1990s comedy series Jeeves and Wooster, but is more famous as the main location for the Downton Abbey series and film.

The track continues, skirting Sidown Hill.  Supposedly there is a Grade II listed building at the top called Heaven’s Gate, but we saw no sign of it.  There are however plenty of other beautiful views. 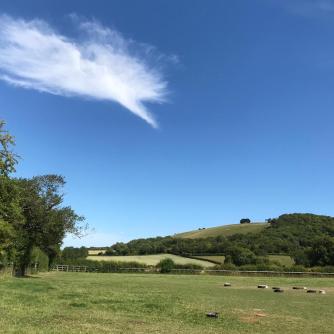 As we reached the powerlines, the path goes down towards the A34.  On the right there is a memorial to Sir Geoffrey de Havilland marking where he made his first successful test flight in September 1910.  His first plane was built with money borrowed from his grandfather.  It took two years to build and he crashed it during its first very short flight! He built a fresh biplane, and the following year made his first successful flight in it. Subsequent designs were even more successful and he went on to have a successful career in aviation. On the left you can see the Seven Barrows which are ancient burial mounds.

The A34 is a busy, fast road and too scary for a goat to cross, so we made use of the signed diversion, which takes you under the A34 to the south towards Litchfield.  (This isn’t marked as a right of way on the OS map, but is signposted in real life). 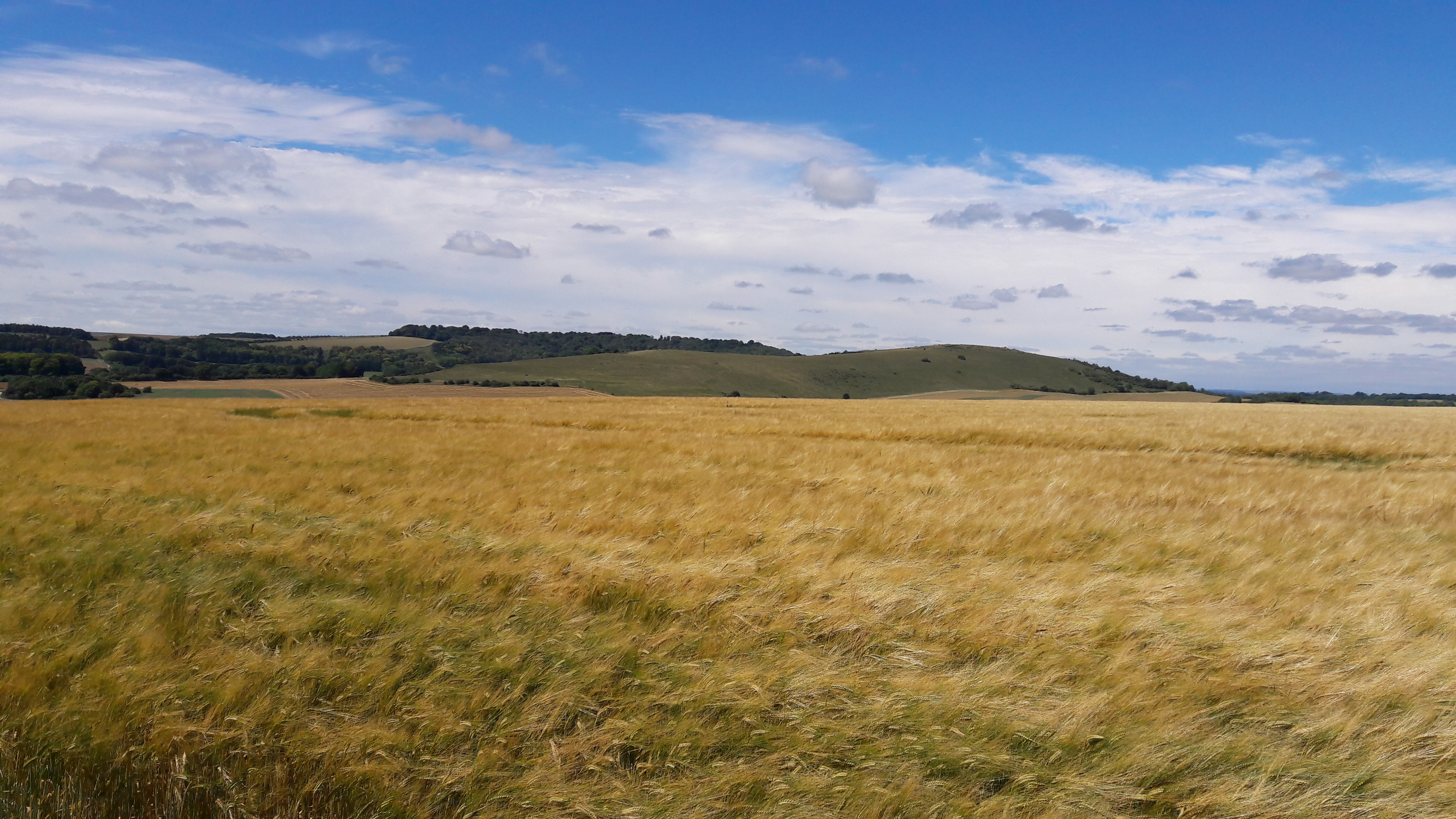 This area has a long history, with a good number of small number of small enclosed bronze age settlements.  Most are only visible from the air as they are buried and land is now cultivated.  However a few survive on the downland as visible earthworks.  Near where the path forks you can see some remains to both the left and the right.

There is a later, Iron Age (500-0BC) fort on top of Ladle Hill.  It is unfinished and it is suspected that it never actually contained a settlement, although it might have been constructed over the site of an earlier, unenclosed settlement.  Because it is unfinished, features that would normally be concealed are still visible making this site has been valuable in helping archaeologists understand the methods used to create these Iron Age enclosures.

Shortly after Ladle Hill we turned off the Wayfarer’s Walk and took the footpath down towards Sydmonton.  This path was very steep and if it had been wet, it might have been better to continue until the next path to avoid this path.

The track comes out onto a road by Sydmonton Court. This is currently owned by Andrew Lloyd Webber and is home to the annual Sydmonton Festival where he introduces new works to a private audience of individuals in order to determine their future.  Among the peices to receive their first public performances at the festival are Evita, Cats, Starlight Express, The Phantom of the Opera, Sunset Boulevard, Whistle Down the Wind, By Jeeves, and The Woman in White.

We turned left to walk along the road all the way to Old Burghclere, where the path appeared to go into a private estate.  I always like it when you’re legitimately allowed to go through people’s gates!  I guess I’m nosey!  This took us past the grade I listed Church of All Saints.  This dates from circa 1100, but restored in 1861.

We wanted to go up Beacon Hil, so we crossed the A34 again, this time using an overbridge by Ivory Farm.  I was hoping to see elephants, but Ivory Farm is a mixed family business of dog kenneling , dog breeding, domestic poultry supplies and waste hauliage!

It was a hot day and it is a steep climb, but the views at the top are spectacular.  The beacon on the hill here used to pass warnings on from Hampshire to Cuckhamsiey Beacon in Berkshire.

As well as amazing views, we also found the tomb of the famous Egyptologist, George Herbert ( 5th Earl of Carnarvon).  Herbert was the financial sponsor for the excavations in the Valley of the Kings  and along with Howard Carter was the first person in modern times to enter the tomb of Tutankhamun.

Beacon Hill doesn’t have any footpaths on it, but we could see you were allowed to walk up it from the car park to the view point.  We hoped we might be able to also go down the other side and join one of the tracks through the Highclere Estate, and a sign we’d seen earlier about Highclere summer walk being open made us hopeful that would be possible… but it wasn’t!  This hill is one way up and the same way down again!!!

This made our walk considerably longer than planned as we then walked back to Old Burghclere and then turned right past some cottages and onto the disused railway, back to the subway and back along the Wayfarer’s Way by Sidown Hill.

This railway was the Didcot, Newbury and Southampton Railway…. only it never got as far as Southampton, terminating instead at Winchester! The line opened in two stages, in 1882 and 1885, but its promoter ran out of funds to complete the line to Southampton.

The Company was absorbed by the Great Western Railway in 1923, but became strategically important during World War II when huge volumes of munitions and troops were transported to South Coast ports, particularly in the preparations for the Normandy landings.  To facilitate this, the Didcot to Newbury section was doubled, while the southern section was upgraded with extended passing loops.

The line never carried heavy passenger volumes and declining traffic led to its closure in stages from 1960 to 1964.

This extra walk would have been pleasant if we’d been expecting it –  we saw lots of hares on the railway track, really quite close up.  We saw deer bounding through the fields and a sky lark in the evening sky.

However, we hadn’t anticipated walking so far and the last mile or two our feet began to plod!  Somehow we hadn’t noticed we’d been walking gradually downhill going the otherway, but this way was definitely always uphill!  Suffice to say, after about 16 miles, we were pleased when we saw our cars again!

Other sections of the Wayfarers Walk.